I have this new idea, and it may not be my best one.

I want to review books I read as a kid. Without re-reading them.

Like I said -- maybe not the best idea I ever had.

Why would I want to do something so weird? Nostalgia, mostly, but also because I am curious about the elements of fiction that stick with you after a decade. (Yes, just a decade. Why are you casting that side-eye at me?)

The first book I hall review from memory is ... drumroll, please ...

The FLOWERS IN THE ATTIC series by V.C. Andrews.

Now, I've mentioned my experiences with Madam Andrews in the past (see here and here), but this is the first time I am going to attempt a recap/review ... oh gosh ... 17 years after I originally read it. (See, 17 years is just one decade. Hush your mouth.)

The summer after sixth grade, my best friend Ashleigh introduced me to FLOWERS IN THE ATTIC. (I suspect the devil himself introduced them to her.) We were scandalized at the concept--a man and women get married even though he's her half-uncle. They have four kids. The dad dies, and the mom (who apparently has never heard of sending out resumes or even just signing up for welfare) decides to go ask the parents who disowned her for money. She also wears a lot of negligees.

Unfortunately, due to the incesty-nature of her relationship, Incest Mom has never told her parents about her four blonde babies. She asks the children if they will hide in the attic of her parents' mansion until she gathers the courage to let them know she's the mother of their granddaughter-nieces, grandson-nephews.

You can see where this is going, can't you? The mother tells the grandmother about the kids, but needs more time to break the news to her dad. More time stretches into two years, and suddenly the incest babies start developing some incesty feelings of their own.

Have I mentioned THIS is the cover? 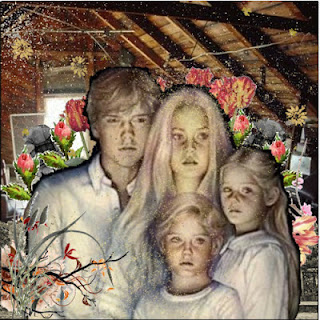 Cathy, the oldest daughter, and Chris, the oldest son, eventually realize they need to find a way out of the attic, because their mom has clearly swapped them for her life of luxury. It only takes them two years for them to come to this conclusion. They come up with an elaborate plan where they steal the key to the attic from their mother (or grandmother), press it into a bar of soap, and intend to whittle a dummy key from the resulting mold.

At this point, I feel like it has to be acknowledged that they could have, ya know, used their rope ladder to climb out a window. (THEY HAD A ROPE LADDER.) Or just rushed the grandmother and raced for freedom, because there are four of them and one of her. Or just started screaming their guts out at odd hours and hoping the servants would hear them up in the attic. Whatever, their plan is unnecessarily elaborate, and that's what you need to know.

Before they can accomplish their brilliant plan, Chris gives in to his incesty and misogynisticy (and possible mother-lovey) feelings and rapes Cathy. She forgives him because she decides she could have stopped him if she wanted, which means she really did consent.

Even at twelve, I found that line of reasoning pretty questionable.

Then it turns out the grandmother was slowly poisoning the kids with arsenic-laced powdered donuts, and Cory dies. Chris, the creepy rapist teen who wants to be a doctor, somehow had some pretty significant knowledge of arsenic poisoning (but somehow didn't realize that they were being arsenic poisoned as it was happening?) and they experiment with the donuts by getting one of the attic mice to eat one. It dies, and they conclude they have to escape post-haste. So they do.

(Did I mention they had a rope ladder all along?)

The sequel, PETALS IN THE WIND, is even wonkier. Somehow Chris, Cathy, and Carrie (the other sister -- personality-free, don't worry about remembering her name) meet a kindly doctor who takes them in, and immediately (1) starts perving on Cathy and (2) somehow figures out there's a REALLY creepy relationship between her and Chris. Somehow the doctor gets custody of Chris, Cathy, and Carrie, because in the 70s, you can just take kids home with you.

Chris and Carrie go off to boarding school (hmmm ... this seems questionable) and Cathy stays with the doctor (single ... widowed ... handsome doctor) so she can take ballet classes in town. She meets this guy Julian, who is apparently an amazing dancer, and also somehow creepier than all the other men in the novels. CREEPIER THAN ALL THE OTHER MEN. Cathy starts an affair with the doctor, which begins with one of the all-time creepy lines of literature: "I wanted to get you a Mercedes for your birthday, but I couldn't, so I got you second-best: me." (I paraphrase, since this is from memory, but I kid you not that line has been burned into my brain since before junior high.) I want to say Cathy is 16 or 17 at this point.

Then Cathy has a miscarriage, since OBVS she got pregnant with her brother's incest baby up in the attic, and this causes some strain on the technically-not-incest-but-still-illegal relationship between Cathy and her guardian. She runs off with Julian, who promptly knocks her up and somehow manages to break all her toes by doing a grande j'ete on them. (I think.) Adios ballet career!

Julian then gets in a car accident and is paralyzed and would rather die than not be the lord of the dance. He has his mom smother him with a pillow. (I think. The details start getting real hazy around this part. Remember, I last read these circa 1996.)

Cathy names her baby Jory and then decides, You know what would be nice now? Some revenge. So she moves to the town where her mom now lives with her hot, younger husband Bart. Cathy seduces Bart. Much like the Mercedes line, I will never forget Cathy's first date with Bart -- she pours herself into some smoking turquoise dress, and then serves him the mac-and-cheese with cut up hotdogs that she made previously for Jory. Then they do it on the kitchen floor. Naturally.

Bart and Cathy's relationship is very weird for many reasons, not the least of which is that Cathy feels that as the hotter, younger version of her mom, she is entitled to be with Bart. (Cathy is in for some nasty surprises after age 35.) I mean, if I were her, I'd be hanging my hat on, "Hey, I make my kid mac-and-cheese with cut up hotdogs, and she locked hers in an attic for years!" But to each their own.

Then there's a ball, and Cathy somehow finds out the exact dress her mother will be wearing, orders that dress, and shows up to the ball in in. Everyone is like, "Whoa, that chick looks exactly like a younger version of our hostess!" Cathy's mom gasps! Bart is understandably very weirded out by everything! John Amos (the creepy butler -- he'll be relevant in later books) sets fire to the mansion! Bart dies! Cathy's mom is left for dead! (Because a sequel is coming!) Cathy's knocked up!

So, fait accompli, Cathy goes back to her pervy doctor from the beginning of the book and they get married. He adopts little Jory and revenge Baby Bart. Older brother Chris is also now a doctor, and despite still perving after his sister, gives the doc the thumbs up for post-marital sex. (Because if there's anyone you want knowing the intimate details of your sex life, it's your wife's creepy rape brother.) There are a lot of sex shower scenes. The old doctor has a heart attack and dies. (Did I mention that I'm pretty sure these books are for teenagers?)

Also, Carrie killed herself at some point because she never grew taller than four feet, and felt unworthy of the cute young pastor she fell in love with because she was an incest-baby. Snooze.

Chris and Cathy get married, since Cathy can't have kids anymore and that's the only part of an incest relationship that creeps people out. The end!

Tune in next time for (much more haphazard) review of the final three books of this terrible series!

Email ThisBlogThis!Share to TwitterShare to FacebookShare to Pinterest
Labels: Book reviews from memory