Author Interview: Ryan Dalton and THE YEAR OF LIGHTNING

Hey all! Today I am so happy to have Ryan Dalton, author of the upcoming The Year of Lightning visiting my blog.  When my friend Kayla at Jolly Fish Press reached out and let me know about this book, I knew I definitely wanted to get the word out about it! I hope you guys enjoy the interview as

Question: How long have you been writing?

Answer: I can't remember a time when I wasn't making up stories. When I realized that actual people wrote books on the shelves, it wasn't even a question -- I knew that would be me someday. At eight years old, I started telling people that I was going to write books, and I remember so clearly being confused about why they laughed. Even as a kid, I meant it very seriously.

(RuthAnne's note: I relate to this so hard.)

When did you get the idea for The Year of Lightning and how long did you spend writing it?

I keep a journal specifically for book ideas, and the concept for THE YEAR OF LIGHTNING sat there for at least a couple years before I wrote it. When the time came to pick a project, I read through every idea in the journal again, looking for something that would reach out and grab me. This idea leapt off the page. Even while I was reading through other iras, the central idea of LIGHTNING just kept coming back to my mind. I kept asking more questions and wanting to find the answers. By the time I'd written the full synopsis, I knew this idea was the winner. I had to see where it went. In all, I spent almost two years writing it before submitting.

About halfway through the first draft, I realized the characters and the world would have a lot more story to tell. So I started taking little breaks to make notes about books two and three, just enough to have a skeleton of the whole story. It turned out to be very helpful because I could plant subtle seeds in THE YEAR OF LIGHTNING. By the time I started submitting, I knew the major plot points of both sequels. It was so exciting to think about where the characters would go next, and I'm so pleased that I get to tell the whole story. My publisher has been incredibly supportive of the trilogy from the very beginning, which has made this whole experience even better.

Your cover is awesome -- did you get to have any input on it, or were you just pleasantly surprised when you first saw it? 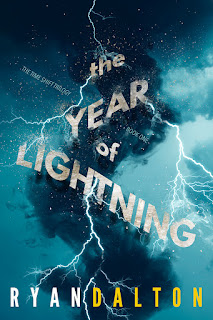 Thanks! I'm so happy with the cover, and all the positive reactions have been awesome to hear. One of the reasons I love Jolly Fish Press is that they're collaborative. They want to work closely with the authors and make publication a shared experience. So before they started with cover design, they asked what I had in mind. There was a general concept that I thought would work, and there were a few things I definitely didn't want. I drew comparisons to some of my favorite books covers (such as SHADOW AND BONE), saying what I liked about them and why. Jolly Fish took my notes, combined them with their own ideas, and came up with something even better than I had hoped for. Just recently we've gone through the same notes/concept process for the sequel, THE BLACK TEMPEST, and I'm equally excited to see how that cover turns out.

Any other big projects on your horizon?

I'll be hard at work on the Time Shift Trilogy for awhile still, so I'm not exactly sure what will come after yet. I have lots of other book ideas and would love to tackle any number of them. Also, I've been working on a sci-fi board game that's about 80% finished, and at some point in the next few years I'd like to produce it through Kickstarter. Beyond that, I feel like the sky's the limit. I just love to write and create, I'm willing to do it for a lot of mediums, and I'm eager to see what other opportunities may come around.


Thanks for answering my questions, Ryan! For those of you who are interested in finding more information about Ryan or The Year of Lightning online, check out the links and trailer below!


*Praise for The Year of Lightning*
“A rousing mix of science and fantasy that will thrill young and old alike!
Dalton blends wit and emotion and adventure seamlessly in a tale that keeps
your pulse pounding.” –author Ryne Douglas Pearson (Knowing, Simple Simon,
Cloudburst)
“Exciting plot, smart characters, and engaging prose: Dalton’s writing
jolts straight to your heart.” –Ellie Ann, New York Times bestseller
“With cheeky winks to classic time travel and a mind-bending central
mystery, The Year of Lightning moves at a pace that lives up to its title
and will keep your pulse pounding to the last page.” –Karen Akins, author
of the LOOP series
Posted by Ru at 7:00 AM 1 comment: