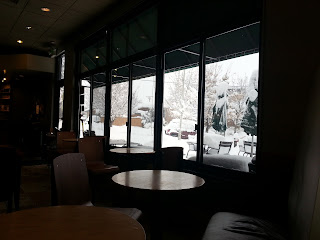 It started snowing last night in New Denver, and I have not left my house since.

There is easily a foot of snow outside my house, and it hasn't stopped coming down. As far as I can tell, the last time a plow took on my street was last night at 7 pm. Poor Yaris has no shot of making it out of the driveway, much less all the way to work. So I took my trusty lappy up to the local Starbucks, ordered a scone, and did as much work as a lawyer girl can on an unsecure Internet connection.

Things are rough out there, folks. Last night Diego worked late and ended up staying at a friend's house because he couldn't come home. When he finally pulled onto our street this morning, there was nowhere to park but the middle of the road if he didn't want to get stuck.

Diego and I broke out our trusty shovels to clear a spot. Spence supervised.

Normally, Spence is never off-leash in our neighborhood. Not because it's a particularly busy neighborhood--it isn't--but because he can't be trusted. Spencer would befriend an armed robber if he broke in, forget about a car. But with so much snow, and so few drivers, I figured a few minutes of frolicking in the snow couldn't hurt.

Until a taxi slowly made its way up our street.

I looked around for Spence in a panic. I couldn't see him anywhere. So I leaped in front of the taxi, which was probably traveling at about four miles an hour. "Stop stop stop!" I yelled. The startled driver reduced his snail's pace to a slow, snow-crunching halt.

I glanced around, and there sat Spence, sitting in the taxi's path, looking up at me expectantly. I snatched him up and smiled apologetically at the taxi driver--who was now stuck in the snow.

I walked back to where Diego was still shoveling. "You know Spence was totally standing by me until you ran in front of the taxi, right?" he said softly, so the taxi driver wouldn't overhear.

Finally the taxi driver was able to get going again and he pulled even with us. He rolled down his window, but his face was friendly. "Don't worry, I saw your car!" he yelled. "I wouldn't have hit it!"

Diego and I glanced at each other. Given that Diego's car is pitch-black and parked in the middle of the road, I don't think a legally blind driver would have missed it. But rather that pointing that out, we both smiled as widely as we could and waved back. "Ok, awesome! Thanks so much!"

All I can say is, where is Mr. Plow when you need him?