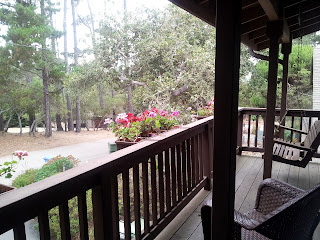 So last week I set off for lovely Undisclosed Location, courtesy of some lovely relatives. (If you really must know, there were pine trees, fog, and elephant seals. Get crackin', Ghost Writer.)

My goal for four days at Undisclosed Location was simple: finish JRgtC.

And thanks partly to Echo's CD mix, shockingly delicious sugar-free/caffeine free vanilla chai, Diet Coke, and no cell reception, finish it I did.

Now, "finishing" is a subjective term, I think we all know. To me, "finished" means there is a beginning, a middle, and an end, and those three things are mostly tied together. But is it ready to be read?

I know this will come as a serious disappointment (just pretend it's a disappointment, ok?), but let me show you a little something: 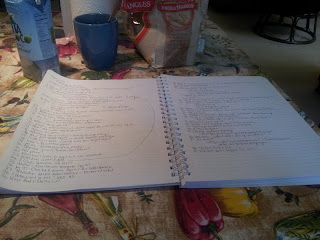 This list? This is the list of things that have to be done before the draft is REALLY finished--and no, it doesn't include "critiqued" by other writers. That will come after item No. 43 (yes, FORTY-THREE) is checked off.

I started this project last year during NaNoWriMo. I realized somewhere in the third week that it wasn't working and gave up. Mid-December, I figured out the solution and kept going. Around March, something seemed to be going wrong again.

In May, I re-wrote the beginning so I could share it at LDS Storymakers, where Krista Lynne Jensen (yay her!) had some nice things to say about it.

And sometime during the summer, I had an epiphany:

The reason it takes me so long to write (well, one reason, anyway) is that when my story hit a snag, I stop and ponder my way out of that snag. (It's a lawyer habit. I spend a lot of my day staring out my window until BAM! brilliant idea comes my way. Except with the law, that BAM moment usually happens after an hour or so, and writing, it is sometimes ... umm, longer.)

So why not put a few X's where I need to return, and then move along?

Ahh. Now that To Do list above makes sense, doesn't it? When I say "finished," I mean my characters have all been introduced, their problems revealed to the reader, and those problems have been resolved. But every once in awhile, there might be a [HERE'S WHERE X NEEDS TO HAPPEN] before there's a hop, skip, and a jump to the next scene.

Long story short: I'm going to check everything off the list this week, and that will be cause for a second mini-celebration.

But for now, I'd just like to stare out my window for a minute and enjoy the fact that I can safely say, my characters have reached happily ever after ... ish.