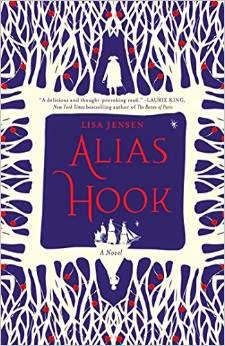 From the description:
"Every child knows how the story ends. The wicked pirate captain is flung overboard, caught in the jaws of the monster crocodile who drags him down to a watery grave. But it was not yet my time to die. It's my fate to be trapped here forever, in a nightmare of childhood fancy, with that infernal, eternal boy."

Meet Captain James Benjamin Hook, a witty, educated Restoration-era privateer cursed to play villain to a pack of malicious little boys in a pointless war that never ends. But everything changes when Stella Parrish, a forbidden grown woman, dreams her way to the Neverland in defiance of Pan’s rules. From the glamour of the Fairy Revels, to the secret ceremonies of the First Tribes, to the mysterious underwater temple beneath the Mermaid Lagoon, the magical forces of the Neverland open up for Stella as they never have for Hook. And in the pirate captain himself, she begins to see someone far more complex than the storybook villain.

With Stella’s knowledge of folk and fairy tales, she might be Hook’s last chance for redemption and release if they can break his curse before Pan and his warrior boys hunt her down and drag Hook back to their neverending game. Alias Hook by Lisa Jensen is a beautifully and romantically written adult fairy tale.

I love almost all things Peter Pan (surprisingly, not the Disney movie) so I was stoked about this adult retelling from Captain Hook's perspective. The story is alternately told in "present day Neverland" and Hook's past, explaining how the Captain arrived in Neverland and why he's stuck there. The little twists to the familiar story are just about perfect. I loved Jensen's explanation about why the Native Americans live in Neverland (they made a deal with Pan so they could maintain their culture and escape white settlers in North America). Hook's crew constantly replenishes itself as Lost Boys grow up, with only Hook being forced to come back to life again and again so he can keep doing battle with Pan.

That being said, the beginning was a little slow, but if you can get through that, the ending is more than worth it. Definitely recommended, with one caveat -- there are references to adult fairy tale characters doing the grownup. So, you know, don't be too shocked.
Posted by Ru at 9:49 AM