I am so excited to participate in the cover reveal for Brianna Shrum's book NEVER NEVER! I came across Brianna when I was researching Pitch Wars this summer and I can't wait to read this book in September. (I believe I've mentioned my Peter Pan obsession before, yes? Yes.)

So, without further ado, the cover! 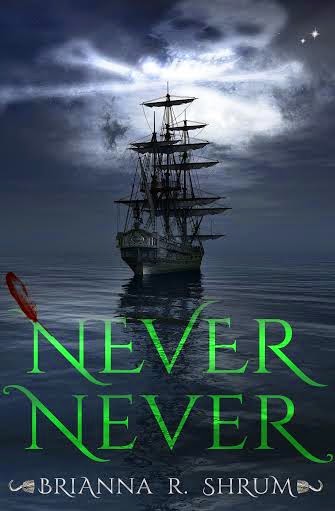 Isn't that fantastic? Here's the summary:


James Hook is a child who only wants to grow up.

When he meets Peter Pan, a boy who loves to pretend and is intent on never becoming a man, James decides he could try being a child—at least briefly. James joins Peter Pan on a holiday to Neverland, a place of adventure created by children’s dreams, but Neverland is not for the faint of heart. Soon James finds himself longing for home, determined that he is destined to be a man. But Peter refuses to take him back, leaving James trapped in a world just beyond the one he loves. A world where children are to never grow up.

But grow up he does.
And thus begins the epic adventure of a Lost Boy and a Pirate.

This story isn’t about Peter Pan; it’s about the boy whose life he stole. It’s about a man in a world that hates men. It’s about the feared Captain James Hook and his passionate quest to kill the Pan, an impossible feat in a magical land where everyone loves Peter Pan.