Book recommendation: The Masque of the Red Death 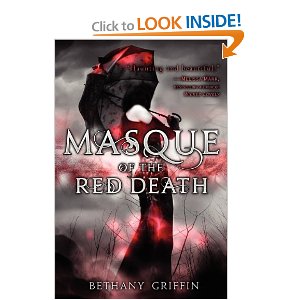 Masque of the Red Death is a creepy dystopian-steampunk mashup. (For anyone who, like me, sometimes wonders what the hell "steampunk" even is, I think it's anything with corsets and a lot of contraptions.)

It's set 5-10 years after a plague has decimated the population, and the only people who are able to go out regularly are people wealthy enough to afford a special face mask that protects the wearer from the plague. Once you breathe into a mask, it will only work for you, which means the poor can't even steal them.

Gosh, do you think that the poor might lead some kind of revolution under these circumstances? (Answer: Yes.)

Araby Worth's father invented the life-saving masks, but his invention was quickly co-opted by the government as a means of controlling the population. Araby is semi-content to waste her life partying with other nihilists, until she is confronted with the underground rebellion that needs Araby's father's invention.

My biggest concerns with this book is that the main character, Araby, was sort of vague in my mind. She's a bit of a sadsack, but honestly, who wouldn't be? (I'm hoping she gets a little tougher in the sequel.)

But the ideas are creepy enough (in a good way) that I'd recommend this book to anyone looking for a Christmas present for a teenage reader. Go forth and enjoy!