This is the biggest favor I have ever asked you guys (even bigger than the time I asked you to "like me" on Facebook, and may we all pretend that never happened, ok?)

And believe it or not, I cannot remember the title, author, or names of any of the characters. IT WAS A LONG TIME AGO.

I periodically wish I could remember the name of this book so I could re-read it and see if it lives up to the hype of my memory. I've tried, and failed, so many times.

But I remember almost all of the plot. So in an effort to hunt down this much-beloved book, I am going to tell you ABSOLUTELY EVERYTHING I can remember about it, and hopefully someone in InternetLand can help me out, ok?

The book starts in a small town or village in the 1800s (possibly the later half of the 1800s). The town is being attacked by werewolves (though, I don't think they were referred to as werewolves). The main character, a girl of about 13, realizes that her beloved older brother is one of the werewolves when he takes down the herbs over his window that were intended to protect the family. She tries to warn her father. The brother is ultimately killed by the villagers.

When her father realizes the girl saw the signs of the brother being a werewolf, he decides she should be trained (in what? never specified). Her mother objects to this plan. An aunt and uncle come to debate the matter. (The uncle has a really strange name.) They decide that the girl will stay at home with her parents and learn basics like herbology and healing for a few more years. There's a lot of lovely discussion about flowers and minerals and sketching things into books.

A few years go by. The Heroine develops a crush on Boy 1 (who the reader recognizes as unsuitable husband material, even though Heroine does not). A new family moves to town with a beautiful daughter who is always ill. Boy 1 drops Heroine like a hot potato for the new girl. At a town dance of some kind, the heroine realizes the daughter is a vampire and Boy 1 is under her thrall, though Boy 1 just accuses her of being jealous. Heroine, father, uncle, and Boy 2 (shyer, older, and clearly a better catch than Boy 1, though Heroine doesn't realize it yet) go to kill the vampire. Her "parents" (really grandchildren or great-nieces and nephews) are terrified and relieved, as they've been forced to help her for decades. Boy 1 does not recognize the solid that Heroine did for him and totally blows her off for reasons like emasculation or something.

Mother is super angry that the family members allowed daughter to go vampire hunting in defiance of the mother's orders. At this point, the aunt (?? Pretty sure it was an aunt) comes to take Heroine off to do more training elsewhere to resolve the family conflict. Boy 2 does something really thoughtful like carving a chest for all of Heroine's healing magic herbs.

Aunt and Heroine hear of a town that used to be called Cloudcatcher. (How I remember the name of this town and none of the names of the characters is BEYOND ME.) The town currently has a much creepier name, as the town is haunted by a malevolent ghost. It's always dark and depressing and the sun never shines on the town. Aunt and Heroine do some investigating. The mayor's daughter is behaving in a very questionable manner. She apparently has a beau her father disapproves of. The beau has been away, mysteriously, though the mayor's daughter is convinced he shall return.

Aunt and Heroine do more investigating. Apparently the ghost is an unwanted baby (either aborted or left out to die by some desperate teenage girl in the town after her boyfriend abandoned her). Aunt and Heroine do an exorcism which just pisses off the ghost baby more. They then discover the mayor's daughter is PREGNANT (which is a direct echo of the situation that created ghost baby). When the mayor's daughter's boyfriend returns and proposes to the mayor's daughter, the ghost baby is either appeased or weakened so it is successfully exorcised. The sun comes out, the town goes back to being called Cloudcatcher. There is some reference to Boy 2 either planning to come for a visit or sending a gift to the heroine, and the book ends.

In the mid-1990s, it had a black and white paperback cover of what might have been a cabin. Or a forest. Or a mountain. I'm hazy.

A THOUSAND INTERNET HUGS TO ANYONE WHO CAN FIGURE THIS OUT!
Posted by Ru at 4:55 PM 3 comments:

Hello, my name is RuthAnne, and I am addicted to giving my characters crazy names.

Many people have talked to me about this, over the years. My sister. My friend Diego. Mostly just those two, actually. If other people were concerned, they kept their thoughts to themselves.

And now that Diego is offering his thoughts on my manuscript before Pitch Wars, the topic has come up again.

(To be honest, I think my list of crazy names is sort of whimsically perfect, particularly given it's set in Utah. I mean, you've heard some of our names, right? But I might end up changing a few of them, just to be on the safe side.)

What is the craziest name you have ever read in a book? Is there ever a moment where you think, "No...no, this is not working for me"?

I don't know about you all, but normally celebrity deaths don't really upset me. I mean, it's sad, but I didn't know them, right?

I don't know what I want to blog about, other than to say what we already know -- depression is no joke, people. There's no reason why it hits some people and not others and it always needs to be taken seriously.

If you know someone who is depressed, don't try to "cheer them up."

If you suffer with depression, tell somebody. And if that person doesn't take it seriously, tell another person. Keep going until you get the help you need, because it's out there.

Here's a fun video for everyone. We could all use a smile.

Pitch Wars Application Bio: Or, The Day I Learned How To Use GIFs

Here's the thing about Pitch Wars: Most of us ain't getting picked. The statistical reality is that, despite the confidence I have in my story, I will not make it into Pitch Wars. And that's ok, since I will be doing the regular-old querying thing this fall if I don't make it in. Pitch Wars is a great opportunity and I hope I get to take advantage of it, but if not, I will live.

So I am not making a mentee bio.

But here's the OTHER thing: I just learned to use GIFs. So ... obviously I still wanted to do a getting-to-know-me post.

(I mean, seriously, if someone had told me a long time ago that GIFs were this easy to use ... I would have been blogging with GIFs a long time ago.)

So if you've never met me before, welcome to the blog! This is me:

I'm a lawyer and a writer and there are cowboys in my office. (There is a good reason for the cowboys.) When I am at the day job, I usually do my best to have a neutral-to-inquisitive expression on my face. This can be difficult, as I was born with a severe case of RBF. Symptoms of RBF include being frequently misunderstood and an inability to make friends in group settings. If you too were born with RBF, know that you're not alone.

This is my ethos. Most of it came from TV, and I don't feel at all bad about that, because I love TV.

1. If you want to inspire someone, quote Coach Taylor.

It's very simple, always start out with, "Listen to me, son. I'm gonna need you to listen."

2. When you want to burn someone, channel Don Draper's contempt. 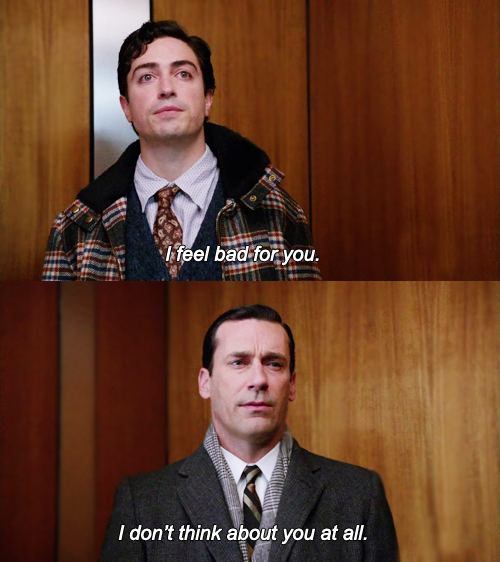 3. And when it comes to succeeding at work, lean in like Liz Lemon.

4. When you have to admit you've blown it: 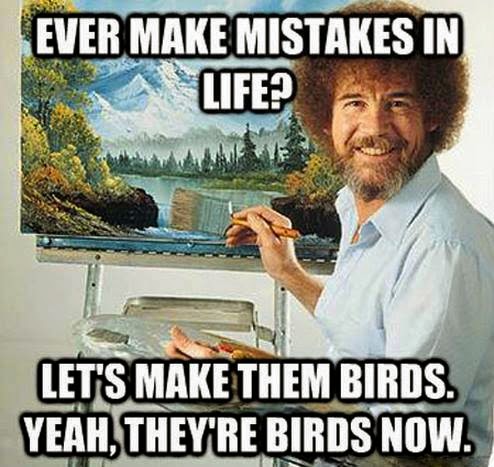 5. And when you want to blow someone's mind with your concept, and then totally fail to deliver in the long-term, just distract everyone with an attractive pirate:


(Spoiler alert: There are no funny Once Upon a Time gifs.)

6. If you find a partner-in-crime, treat them right. Like this:

Don't let it get weird.

7. And when it comes to telling stories, I think it's always better to err on the side of ...

I take my storytelling very seriously.

(Of course, as an attorney, there is no one who makes the bile rise in my throat QUITE like Nancy Grace. But that's neither here nor there.)

8. And if you can't remember anything else about me, just remember this:

Email ThisBlogThis!Share to TwitterShare to FacebookShare to Pinterest
Labels: It’s all just part of my inestimable charm, Writing Bear

Awhile back, all my Facebook writerly friends were posting the first lines from the first three chapters of their current works-in-progress. Since I am a big-ole-lemming, I am going to do the same--except cheat and do the first line, first two lines, and first three lines.

(Brief foreword: this book is written in multiple POV, which is a decision I really love. Various readers that I all respect have had different opinions on this decision, so I am currently rolling the dice and sticking with it. I guess we will find out if that was an awful idea or not come #PitchWars, amiright?)

I love Elin Angstrom to death, but it pisses me the hell off that she tried to kill herself.

Not for the first time, I wished that we could just tell Teddy about Elin’s Incident.
Partly because as one of her oldest friends, he deserved to know.

The last thing I wanted to do was put on the prom dress hanging on my closet door. But if I didn’t get up and change soon, my step-dad Will was going to pop his head into my room and try to talk about my feelings.
And neither one of us was that great at talking about feelings.

I tag all the other writer folks to do the same -- put the link to your blog post in the comments so I can go check you out!