The Nano wrap up

In case you didn't figure it out by the lack of movement on my Nano widget, I gave up on National Novel Writing Month a few weeks ago. Not on my project, which I think is a good idea, and which I will hopefully resume writing in December.

But as it turned out, November was a better revising-and-outlining month than anything.

It was also a good month for cooking, and watching television both creepy (Walking Dead and American Horror Story) and not (Downton Abbey), and Christmas shopping a month early.

And you know what? I am not remotely sorry that I was not committed enough to my craft to choose writing over college football, or skiing, or parties with my friends. Because sometimes you need a palate cleanser--mental sorbet, if you will.

I will keep you posted in December, when the real work (re)begins. 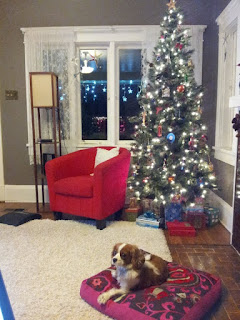 Dropbox. You want this.

Would you like a program that allows you to access all your important files, no matter what computer (home, work) you're using?

Cut and paste this link into your browser: http://db.tt/CcXJqnHd to download Dropbox, a super awesome program that allows you to store files in the cloud and access them just about anywhere, including on your phone or tablet. And it's for freeeeeee! (Am I the only one who pictures Rebel Wilson from Bridesmaids whenever you hear the words, "It's for free"?)

For those of you wearing writey-pants or lawyer-pants, let me tell you, it's extra nice to be able to pick up with your work, wherever you left off, even if you're not on the computer you normally use. Never haul a box of files home again! (Well, almost never again.)

And for the sake of full disclosure, if you use the link I posted, I get more storage space in my account. Woot!

So get downloading Dropbox. You won't regret it.
Posted by Ru at 3:31 PM 2 comments:

Diego and I have an idea for a television show. It's got a little My Fair Wedding with David Tutera flavor, mixed with everything you want to scream at your TV whenever you find yourself watching MTV.

Here's the premise: People on reality TV shows agree to let me and Diego run their lives for 90 days. They can't disagree with any of our decisions made on their behalf.

For example, Janelle from Teen Mom 2. Sorry Jenelle, you signed up for Irrevocable Power of Attorney, so now you're dumping Kieffer, back in college, in counseling with your mom, and taking daily drug tests.

Don't like it? Shouldn't have signed on to the show if you didn't want someone to fix all your problems and make your life a million times better.
Posted by Ru at 11:04 PM 4 comments:

Email ThisBlogThis!Share to TwitterShare to FacebookShare to Pinterest
Labels: Lawyerin

Last night my friend Rodrigo held Friendsgiving at his house. For those that don't know, Friendsgiving is just a pre-game Thanksgiving for you and your friends, before everyone runs off to do the big shebang with their families.

Diego, Hannah, and I were assigned a sweet potato dish, among other things. I highly recommend it.

Brown the shallots in a pan with the butter until soft and translucent. Add the brown sugar, salt, spices, lemon juice, half-and-half. (If it smells kind of awesome at this point, well done.)


* A lot of my recipes are "adapted slightly," since I tend to forget ingredients and/or disagree with instructions. This has resulted in more than a few cooking mishaps, but at least when I give you recipes on the blog, I know they worked.

Email ThisBlogThis!Share to TwitterShare to FacebookShare to Pinterest
Labels: Feminists can be domestic too

You know how new parents love talking about poop on the internet?

Spencer is on a regimen of drugs for his condition. One of those drugs makes him pee like a racehorse, and as such, is typically only given to him when I know I (or a designated roommate) will be home for a 5-6 hour stretch so he can be let out regularly.

Because frankly, you just don't want to know what happens to that dog when he's on that medicine. It's like he takes the pill and suddenly, all previous house training disappears.

If he doesn't get taken out hourly, there's no patient waiting by the door to be let out. No warning whining. No holding it.

There's just your house. And a 15-pound pee bag disguised as a dog, waiting to go off, preferably in the areas and on the belongings you love most. A urinary terrorist.

So you know no good can be coming when you get a text around 12:30pm on a workday that says,

Hey, did you give Spence his pee pill this morning?

As it turns out, in my haste to get out the door this morning, I did give Spence all three pills instead of his typical morning two.

And Spence rewarded me for that oversight by peeing all over Diego's bed, clean laundry, and our hallway.
Posted by Ru at 1:04 PM 1 comment:

Things that cheer me up today

1. This amazing video a friend sent me last night:


2. Starbucks is doing 2-for-1 holiday drinks this week between 2:00pm and 5:00pm. Go forth and get yourself a 500 calorie cup of amazingness, because you deserve it! Promotion ends this weekend.

3. I finished the revisions on my newest project. (Yay!) I am now drafting the terrible, terrible query letter. If anyone would like to give me some feedback on that, I'd love to shoot it to someone else for a second opinion.

Remember, I told you about the Starbucks and showed you the puppies.
Posted by Ru at 2:59 PM 1 comment:

It's not the size of the election that matters

So remember that one time when I said a valid choice in a presidential race is to not vote?

I stand by that.

However, it only applies to PRESIDENTIAL races. If you find both choices equally unpalatable and can't find a single thing to distinguish them, don't say you're an undecided voter. Just decline to vote for president.

But no one will know that you declined to vote for president if you don't bother voting for anything.*

Here is why you should still vote, even if you don't want to vote for president:

Call it silent dissent in a broken system all you want, it's actually just laziness.

2. There are these other races for things called "not being president." Like members of Congress and your local legislature. Judges. School board. Governor. Attorney general. Treasurers and auditors, mayor and city councilors. And they are all PEOPLE, just like you and me.

Here in Salt Lake, there is a proposition about open trails and and two potential amendments to the Utah Constitution dealing with property tax and members of the military, and severance tax investment.

If you think that by not caring about ANY of that, you're making a statement about our "divisive" system, let me tell you -- you are just as divisive as anyone else, because you REFUSE TO find out that there are a lot of local or nonpartisan issues out there that could really use some support or criticism. Because even just showing up to say, "Yes, I support Leslie Knope for city council and I support Ron Swanson for auditor,"** and leaving everything else BLANK is more meaningful than doing nothing.

So if you really aren't going to vote today, enjoy those Coco Puffs.


* Not true, clearly, because you will most likely brag about your enlightened choice on the twitterbooks.

** Umm, clearly this is a nonpartisan blog, because not only are those fictional characters, but they are on the opposite ends of the political spectrum.
Posted by Ru at 8:43 AM 10 comments:

Email ThisBlogThis!Share to TwitterShare to FacebookShare to Pinterest
Labels: I majored in political science and this is what I've done with it, Shameless nerdiness

You know how sometimes, you are just having the very worst day?

That's what I was having on Friday. Just an all-around terrible, no-good day.

And to cap off this day, after work I was on the phone with my plumber (remember that basement tale of woe?) while I was walking Spencer. My mind was a little less on Spencer and a little more on my financial situation as my plumber told me __________________________ (censored to ensure limited whining on the internet).

I hung up the phone and started to trudge back up the street when a man ran out of his house, across the street, with a plastic bag in hand and yelled at me, "Hey, do you need a bag to clean up your dog's shit?"*

"So aren't you going to clean up your dog's shit?"

I started getting angry. "He hasn't gone yet," I replied waspishly.

"I just watched him, it's right over there," he said, pointing to a little spot on the grass strip next to the sidewalk.

"Oh," I said, feeling a bit stupid. So I cleaned up Spencer's poop while the Poop Warden glowered at me.

Now here's the thing. I'm not going to make any excuses -- I should have been paying more attention to my dog, given he was bound to go at some point on our walk.

But folks, let's all take a lesson from the Parable of The Poop Warden. When you notice someone doing something dumb, perhaps a gentle prompting is all they need. "Excuse me, miss, but I notice your dog left you a little gift over there while you were on the phone, and I think you missed it" goes a long way in not having a flaming bag of refuse left on your porch one unsuspecting evening.**


* I told this story to Diego later, all in a huff, and ended with, "And doesn't he know I'm a damn lady? He doesn't get to use that sort of opprobrious language with me like I'm some kind of construction worker."

Diego was amused, and said the bigger issue is that good-mannered people aren't vulgar toward strangers, which I suppose is also a valid opinion.

But I hope the Poop Warden sleeps with one eye open all the same.
Posted by Ru at 10:45 AM 3 comments: